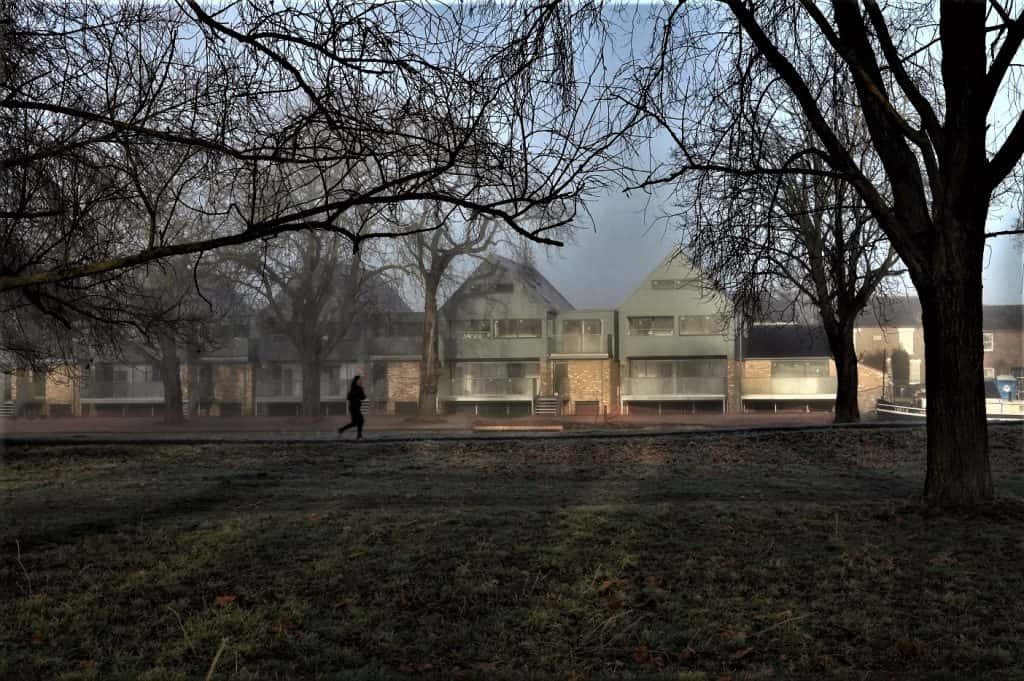 We are pleased to announce that our Reflections development on Water Street, Chesterton has been short listed for this year’s Cambridge Property Awards under “Best Small Development” category (schemes under 30 units). The finalists were all nominated by members of the public and the awards ceremony is scheduled to take place in the first week of December 2017.

The development comprises 5No. 4 bedroom houses, on a site which was formally occupied by a public house. The dwellings with their simple gabled forms and large openings facing onto the river are intended to reflect the design of boathouses nearby. Although situated on a floodplain, the design was conceived to mitigate flood risk. This was achieved both by raising the ground floor level above the predicted maximum flood level and creating flood water storage beneath the properties, by allowing any flood water to enter via large steel grilles. Each property is provided with a raised decked area for private amenity space which looks onto Stourbridge Common, with the semi-private garden area beyond left open and undefined. This strategy was both to prevent structures such as fences impeding flood flows and to locate the buildings within an open meadow landscape setting, which was intended to be read as an extension to Stourbridge Common. A selected palette of materials of brick and weatherboarding (not unlike that of boat houses) was used on all the properties to create a deliberately repetitive but coherent form of development.

As well as relating to the river, the design had the challenge of addressing Water Street itself. On this side the houses have similar aesthetic but take on a more urban form. The buildings were sited with a staggered frontage and corner windows utilized, all intended to create a distinctive form of development which addresses the street frontage from various angles and distances. The developer H.C.Moss Builders Ltd must be congratulated for investing in this formally derelict site, an important first element in the regeneration of Chesterton.

Earlier this year the houses were victims of Latin graffiti. Ironically the resulting publicity helped to sell these properties within a very short space of time.