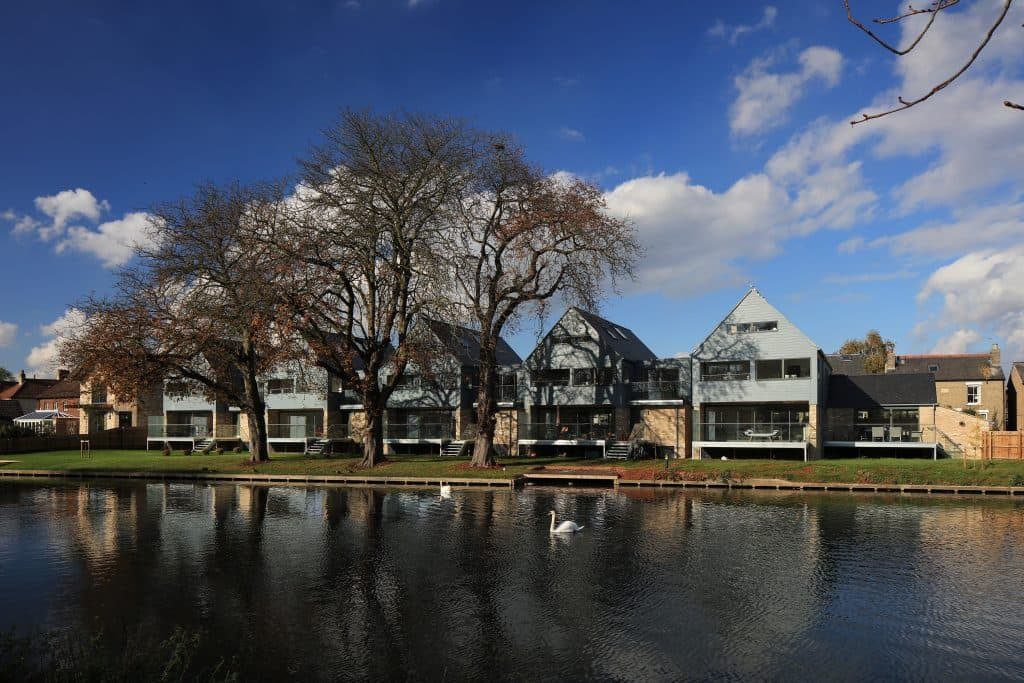 Reflections Shortlisted for CIAT Award for Excellence in Architectural Technology

The development comprises of 5No. 4 bedroom houses which replace a former public house, situated within the local conservation area. The

dwellings, with their simple gable-ended forms and large openings facing onto the river, are intended to reflect the design of boathouses nearby. Each property is provided with a raised decked area for private amenity space which, look onto Stourbridge Common, with additional semi-private amenity space along the river-bank itself which is intended to be read as an extension of the meadow opposite. 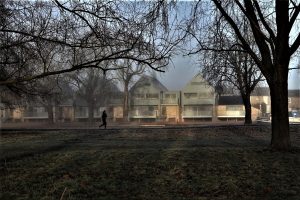 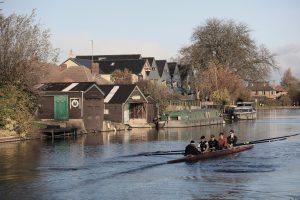 Internally, the ground floor is predominantly open-plan, with large elements of frameless glazing facing the river, offering a strong connection to the landscape.

As the site is situated on the flood plain a core consideration of the project from conception through to completion was mitigating the risk of flooding. We wanted to produce a socially responsible solution that would enhance the sustainability of the buildings without compromising on design.

During the early stages of development, we worked closely with our engineers, the Environment Agency and the local council to ascertain the level of risk of flooding on the site, and what possible approaches could be taken without having a detrimental impact on the surrounding area. One solution often used when building on the floodplain is to simply raise the floor level. The issue with this is the new footprint displaces the water and simply moves the issue further down the river.

The solution that was chosen was to raise the floor level above the calculated highest level of flooding (including an allowance for climate change) for the lifetime of the building. Although, instead of simply displacing the water, the dwellings would allow for water ingress though an accessible void beneath the buildings, which presented the unique structural challenge of elevating the entire structure above a large uninterrupted void which could be serviced and cleaned easy following a flood event. The entrance to the voids were sealed with removable steel grills to prevent the intrusion of wildlife.

The materials at the lower levels were all chosen for their robustness and durability to the elements. Facing masonry was chosen for the entire ground floor with engineering bricks used to line the underfloor voids. For the ground floor structure (above the flood void) pre-cast hollow core concrete planks were used. These were both durable and able to span the uninterrupted voids without the need for excessive steel beams and columns. Lighter weight materials such as engineered timber joists and timber frame was used above first floor level, which reduced both the loading on the below structure and provided a more cost-effective solution for the higher levels where there was less need for this level of durability.

One key part of the client brief was to provide a connection with the river and the view of the large open public space beyond (Stourbridge Common). An advantage of this in terms of sustainability is that the river and desired view is situated south of the development making a great opportunity for large elements of glass for solar gain. This was achieved though the large frameless bi-fold doors and balcony windows to the bedrooms. Both were recessed into the structure to prevent overheating in the summer. This was also helped by the large deciduous horse chestnut trees to the south which, in the summer, shade the houses whilst filter though the low winter sun. Thermal mass was created inside via ceramic tiles and masonry to make the most of the solar gains. 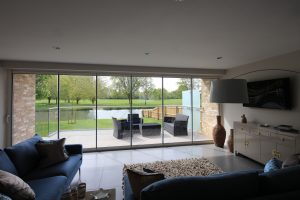 Even though a raised floor level was used, our goal was to ensure that this had no impact on the accessibility of the building. Front doors were set back within the structures so that a gentle ramped access was available to all front entrances with a similar ramped passageway available to the rear gardens.

What Is Passive House? How Much Does Passive House Cost? What fees do architects charge? Planning consent for 9 flats on Water Street granted for Blues Property